Pensacola’s Grande Lagoon neighborhood sits on the Edge of Big Lagoon State Park on the shoreline of the intracoastal waterway across from Johnson Beach, which acts as a barrier from the Gulf of Mexico.

But residents say Hurricane Sandy’s storm surge broke through the sand dunes on Johnson Beach — creating around a dozen breaches, still visible as of Saturday — allowing the Gulf to pour into the intracoastal waterway.

Residents estimated that an approximately 12-foot storm surge pushed its ways into their Grande Lagoon homes.

“The thing is, if you look at Johnson Beach, it broke. Johnson Beach broke,” said Celia Boyd, standing outside her home Saturday on Grande Lagoon Drive. “The water came in here. So, we were getting Gulf waves from the hurricane in here.”

Massive waves were breaking too close to her doorstep she said to experience any semblance of comfort.

Celia and her husband, Justin Boyd, live in a multi-story house at the midway point of Grande Lagoon Drive, which begins at the waterline.

The first floor of their home is elevated off the ground, and the storm surge turned it —and many like it in the neighborhood — into an island, towering above the inland-rushing water on Wednesday morning at the height of Hurricane Sally’s effect on Pensacola.

“This is the intracoastal,” Celia Boyd said, pointing south and down her street to the shoreline.

“We’re supposed to have the barrier islands,” she added, while noting that gaps in Johnson Beach’s sand dunes remained visible to the naked eye a full three days after the storm.

On Saturday, it remained easy to see just how high the water rose on the homes of Grand Lagoon. Water marks on some houses, located closest to the intracoastal waterway, wrapped around first-floor exteriors at about three to four feet high.

The surge had pushed enough debris underneath their house and into their carport that by the time they had amassed it all in their cul-de-sac, the resulting mound stood about 5-feet high and stretched 10-feet wide.

“See all this?” Mowad Sr. said, pointing to pile outside his home on Pointe Verde Road. “The water pushed all of this from my neighbors’ homes who live south of me into my house.” 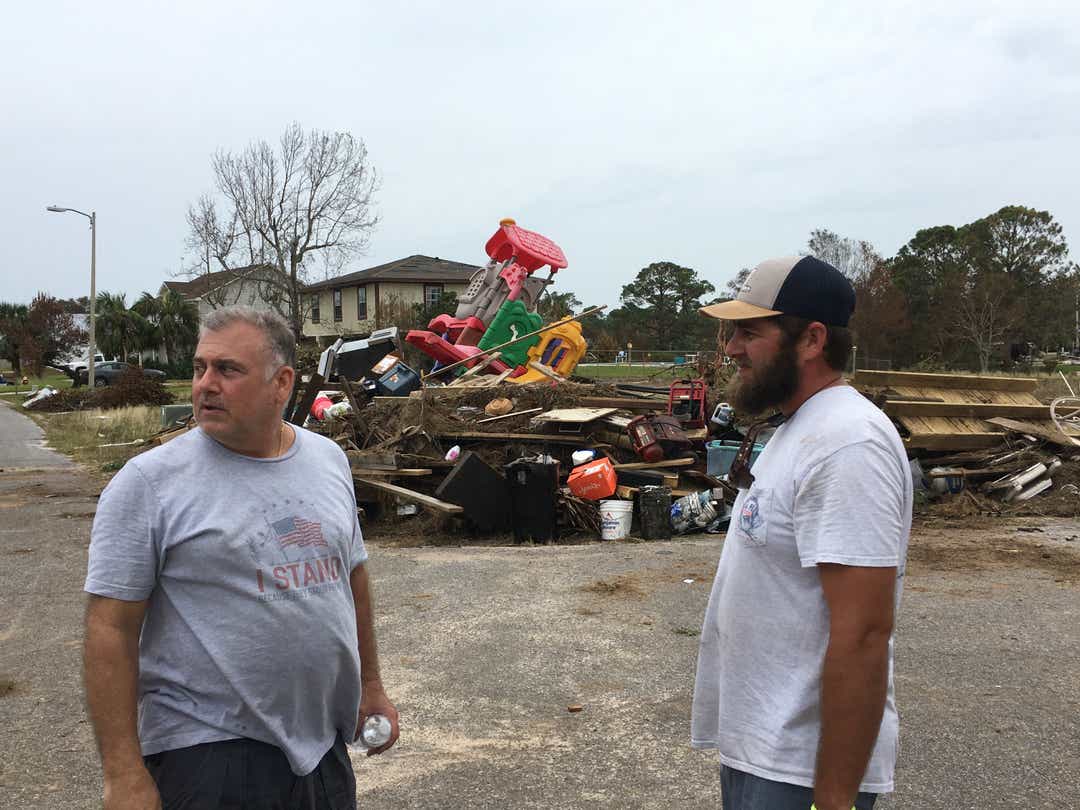 The surge had also carried a small boat into the Grande Lagoon neighborhood and wedged the vessel in between his and and his neighbor’s homes.

“Basically, it’s a repeat of 16 years ago when Ivan hit,” Mowad Sr. said. “Back then, I rebuilt. But then again, back then I was a young, recently-retired 41-year-old naval aviator with more energy to get it gone.

“At 56,” he continued, “the thought of going through it all again, and knowing everything that the process will require, seems mind numbing. It is mind numbing.”

The outside of his home seemed to be in relatively good condition Saturday compared to some others on his street. Painted bright yellow, the structure stood tall with little visible damage.

“Outside it looks beautiful,” Mowad Sr. said. “I had a waterfall coming down my staircase inside. The insulation and the sheetrock are rotten, and I’m pretty sure the interior will have to be completely gutted. … it’s probably a total loss.”

And on top of it all, Mowad Sr. said that looters began to show up in his neighborhood as early as Wednesday night.

“The thing that I’ve learned about storms, you see the best of people and the worst,” he said, noting that he and his neighbors had seen three separate groups of looters in Grande Lagoon over the course of the three nights since the storm.

“They’ll steal anything that’s not nailed down,” he said. “They stole the chairs right off my porch … I haven’t seen a sheriff’s deputy in three days that has come in here.” 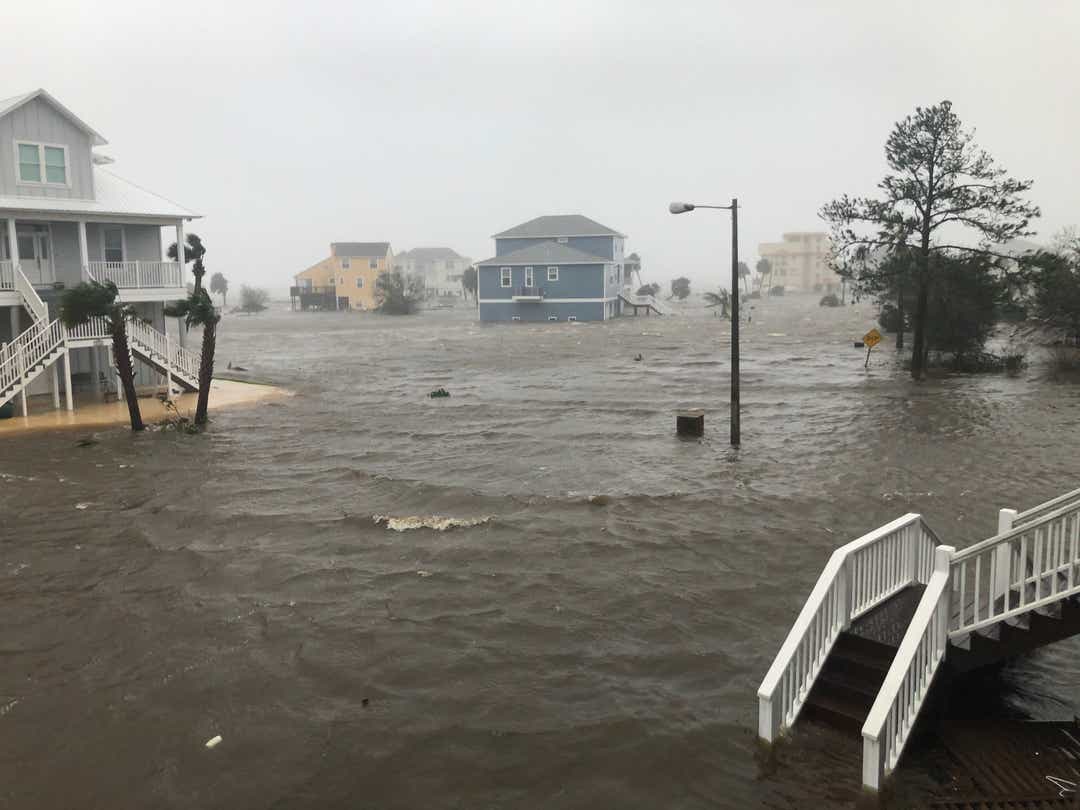 Although, neither the Mowad or the Boyd families had their homes hit by a tornado, they both said that tornados touched the area.

“There are a couple of direct lines through the neighborhood where tornados took down fully-mature, adult pines,” Mowad Jr. said.

And Justin Boyd said that he heard the twisters.

“You could hear funnel clouds coming in,” he explained. “You would hear the normal wind. Then, you heard this, I don’t know, this weird, deeper noise that we were hoping was, well, you know.” 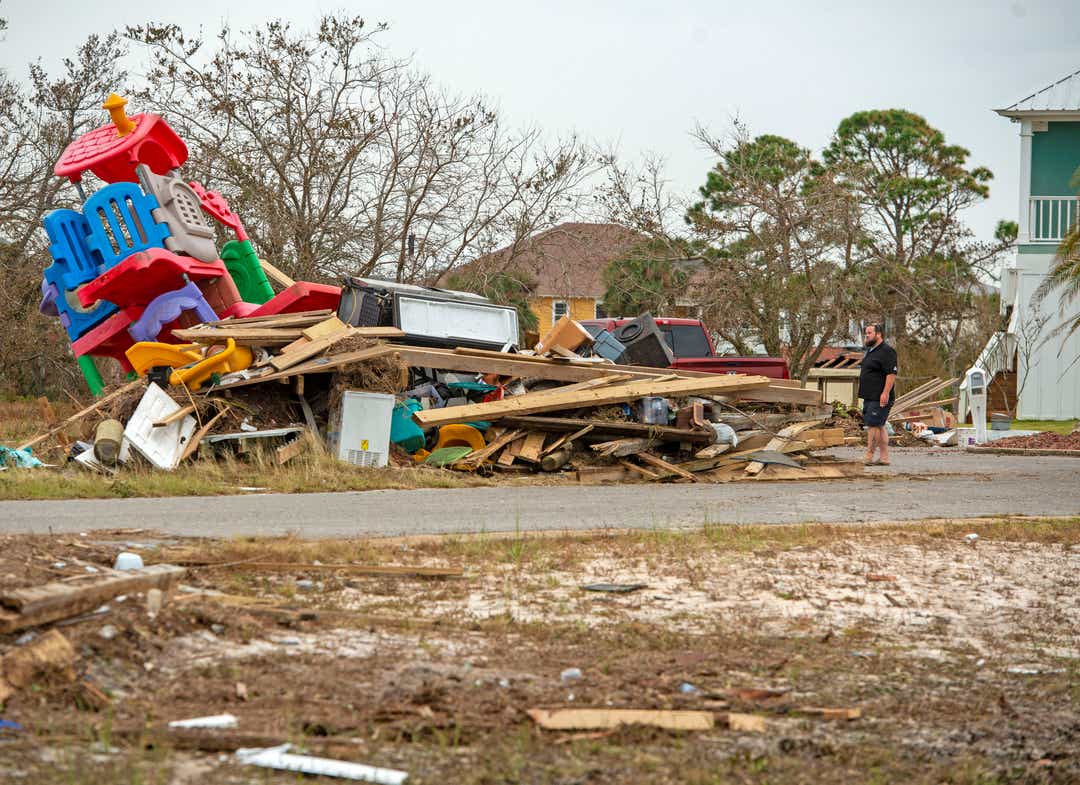 In the midst of watching the water swirl around his and his neighbor’s houses, Justin Boyd was hoping against all hope that a funneling cloud of wind and debris would miss the place where his family sleeps.