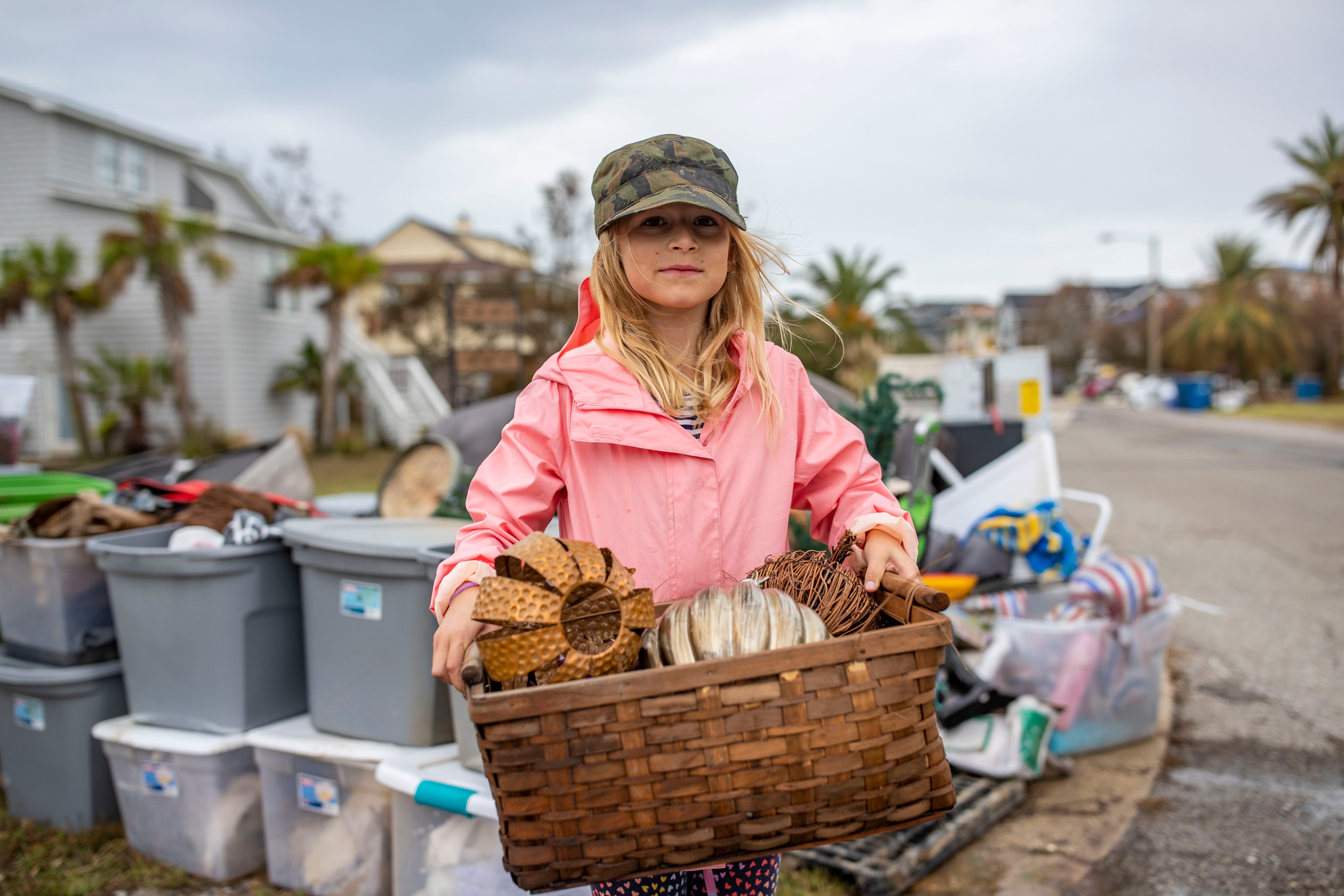 Sayla Cushing, a 7-year-old Pensacola native, bent down in the Deer Point Drive neighborhood in Gulf Breeze to pick up a plastic pumpkin from a pile of debris.

Five days after Hurricane Sally crawled through the area, Sayla said that the road lined with 4-feet-high piles of home goods, wooden planks, children’s toys and kitchen appliances was the largest garage sale she’d ever seen. She and her 71-year-old grandmother, Pam Cushing, were searching for treasures amid the debris.

Hurricane Sally took residents in this neighborhood by surprise, and many said they had only a few hours’ notice to prepare, moving large outdoor furniture to higher ground if they could.

“It kind of sounded like a sound machine,” the child said of the first hurricane she’s experienced. “It’s a machine that helps kids go to sleep.”

After making sure family and friends were safe, Sayla’s grandmother said the family knew to call their insurance carriers, start taking photos and begin the long process of recovery.

But most people along the coast have yet to begin looking toward what comes next.

“It’s too soon,” Carol Osborn said, a resident since the 1980s of a strip of land overlooking the water. “We’ll be in the (insurance) queue. It’ll be weeks.”

Residents like Cushing and Osborn say they feel they were caught unaware by this storm, unlike Hurricane Ivan 16 years ago when folks had a few days to prepare.

Right now, the mantra is to clean up, take photos, document the destruction. But with power and electricity restored to homes, most people say the situation could be worse.

“We will move after this,” Osborn said. “This is when you pay for paradise.”

Insurance red flags, what to know

As many longtime Gulf Coast people know, the first steps after a hurricane — after the calls to family and friends — are to alert insurance carriers and start documenting the destruction.

But handling the process of interacting with an insurance company can be overwhelming as families sort through sodden belongings and evaluate damage.

Some first steps, according to local attorney Keith Weidner, is to report the claim immediately to a family’s insurance carrier, start the drying-out process and other damage mitigation efforts, and document what has happened with photos and video.

Weidner is a partner with the Taylor, Warren, Weidner and Hancock law firm.

Families can do emergency repairs to homes or other buildings, but anything more than that could cause an insurance company to say the cost of the repairs was unnecessary, he added.

Another recurring detail after large storms are the public adjusters who flood the area from as far afield as Miami. Public adjusters are typically familiar with the insurance process, with many of them ex-insurance company adjusters. If hired, they work to document claims and submit them to insurance companies on the homeowner’s behalf.

They are a “mixed bag,” Weidner said.

Some are very aggressive and some are easy for insurance companies to work with, although most will take roughly 10% of insurance proceeds, he said.

“Once they’re in your claim, it’s nearly impossible to get them out,” he added.

Weidner emphasized that if a public adjuster or anyone involved in the insurance claim process makes a situation sound “too good to be true, it probably is.”

What to do, what to look out for:

When should someone contact a lawyer for help? The line is vague, but most local firms will give people advice without charge, Weidner said.

He added that if an insurance company wants to proceed with what’s called an “examination under oath,” families should seek an attorney’s guidance first.

Deer Point resident Cushing said the neighborhood is still in the middle of figuring out what belongs to whom and where it went during the storm. Her and her husband’s 20-foot Grady-White boat ended up in a yard down the road.

One person’s dock knocked on Olson’s door during the storm, she said. On Monday, a battered Jet Ski still sat tilted over in a backyard.

Cushing said her husband contacted their insurance carrier soon after the storm and they’re still waiting on a call back.

“I’m just so sorry we weren’t prepared because we could have avoided most of this,” she said.