Claire and George Teixeira evacuated their Pearson Road home in Milton at around 4 a.m. Wednesday as it became clear that Hurricane Sally was a force with which to be reckoned.

The couple, who live on the Escambia Bay and can see both the Escambia Bay (I-10) Bridge and Garcon Point Bridge from their back yard, expected to come back later and find flooding, some trees down, maybe a bunch of debris in their yard.

Instead, they found a barge.

“We both just started laughing, because we were here for Ivan and we were kind of prepared for the worst. But no one had anticipated a barge,” George said. “That was kind of hysterical. A barge in your backyard.”

The Teixeiras were two of the not-so-lucky recipients of Skanska USA’s runaway construction barges, which broke loose from their moorings by the Three Mile Bridge during the peak of Hurricane Sally’s winds and floated like rubber duckies throughout the Escambia Bay and surrounding waters.

So far, NOAA images show at least 20 barges spread throughout Escambia and Santa Rosa counties. Four crashed through seawalls and into homeowners’ yards off the shore of Pensacola Bay. Another barge hit the bridge heading into the NAS Pensacola main gate, one hit and took out a significant section of the Three Mile Bridge, and another hit the Garcon Point Bridge.

Skanska barges: ‘What do we do?’: Days after Sally, barges stuck in yards of Pensacola Bay homeowners

Two of the barges are located a mile apart from each other on the Escambia Bay in Milton. One is in the  Teixeiras’ back yard, the other is in the back yard of a home about three minutes away on Dolphin Road.

Cheryl and Allen Corlee live in a home on Dolphin Road, next door to the house with a Skanska barge in its yard. Cheryl Corlee said she and her husband were shocked to see the barge nearly in their yard when the winds and water receded Wednesday afternoon. 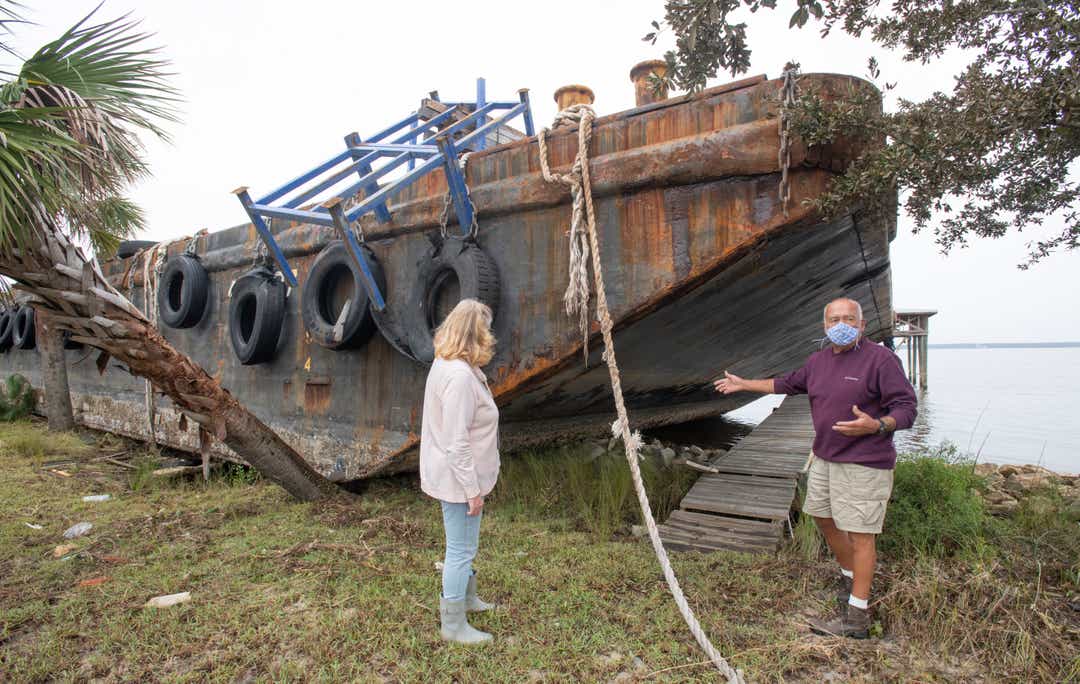 The barge has portable toilets, cranes and tractors still attached.

“I was more afraid of the barge than the hurricane,” Cheryl Corlee said. “When we went to bed that night, I didn’t know if it was going to dislodge and come into our house. If it had knocked (our neighbor’s) pilings, he would have been gone. That scared me more than anything.”

In a statement emailed to the News Journal on Monday, Skanska claimed to be in contact with homeowners who have barges in their yards. However, like other homeowners the News Journal has spoken with on Monday afternoon after that state was sent, the Teixeiras and the Corlees said they haven’t heard a word from Skanska.

The Teixeiras said they’d like to at least have some acknowledgement from someone — anyone — at Skanska that they have a massive steel barge in their yard that needs to be removed. Otherwise, they said, they’ll consider filing suit.

“If they’re responsible and they come and talk to us and tell us what they’re going to do and how they’re going to repair the damage, then no, I don’t anticipate (filing a suit),” George said. “But it really is up to them to own up to the fact that their barge is going to cause some serious damage.”

Skanska officials have refused multiple opportunities to respond to questions. In a written statement, Skanska said they’re working at determining how best to remove the barges.

“Each barge is a unique recovery operation,” the statement said. “We are working with engineers and marine recovery experts to determine how to safely remove each barge while minimizing further disruption to both the homeowner and their neighbors. Skanska is focusing its resources on this urgent effort.”

Those who believe their property was damaged by Skanska’s barges or other equipment during Hurricane Sally can contact pensacola@skanska.com.