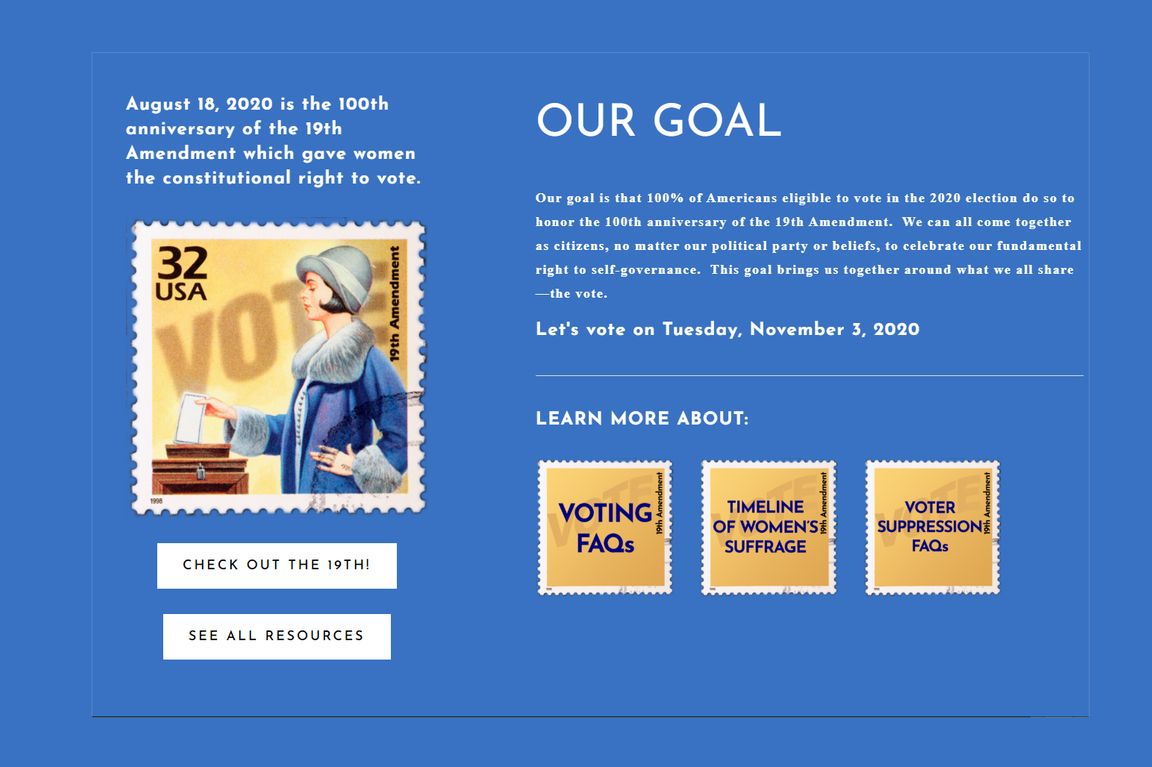 To creatively and civically honor women’s suffrage, Professor Kathleen McHugh, who teaches courses in media, gender and cultural studies at the UCLA School of Theater, Film and Television, along with her friends Eleanor Barr, a Los Angeles-based mediator and Susan Garcia, a New World School of the Arts professor of music, have created the non-partisan website 100 for the 100th. The site acknowledges the 100th anniversary of the 1920 passage of the 19th Amendment, giving women the right to vote, and also encourages 100% voter participation in the upcoming presidential election by all those who are eligible to do so.

We talked with the three women about their project.

What was the inspiration for the creation of this website?

Kathleen McHugh: The idea came to me in 2018. Everyone was polarized prior to the midterm elections, Republicans and Democrats alike. I certainly have my own political views and I’m not immune to passionate positions but I was trying to think of something that would recast or override the partisanship, the deadlock. I realized that the 100th anniversary of the 19th amendment was happening in 2020, the next presidential election year, and the idea of “100% for the 100th” came to me — 100% of the electorate votes to celebrate the anniversary and the right to vote. I thought that having that goal, 100% voter turnout, and celebrating that right, might be an antidote to political partisanship and cynicism. At the very least, it could spur competition among states and constituencies to get as many people to vote as possible. There are so many people in this country who don’t vote.

Eleanor Barr: We wanted to create a website that provided historical context for the 19th Amendment and also inspired people to vote in November. Specifically, our goal was to provide important information about voter registration and voting for all voters, and especially for 18-to-29-year olds, because only 43% of this demographic voted in the 2016 election, which is significantly lower than any other age demographic.

Susan Garcia: We wanted to include not only information on how to register by state but also important information on topics such as absentee voting, voter suppression, history on the 19th Amendment, and an opportunity for readers to post reflections about what the vote means to them.

Why is it important for people, particularly young people, to vote?

McHugh: The more people who vote, the better we can understand our national, collective priorities. It is particularly important that young people vote because they, as a group, have the greatest and the longest stake in the future of our country. And the younger demographic tends not to vote. I, myself, was a disaffected young voter. The McGovern-Nixon presidential election in 1972 was my first; 18 year olds had just been given the right to vote. Of course, Nixon won by a landslide and I was profoundly disaffected by that and didn’t think my vote mattered at all. My opinion about that changed when I took my first class on feminist literature and thought in college. That class helped me see the connection between my voice and my vote.

Garcia: It’s important for people to vote, particularly young people, because they are the largest population of unregistered voters. Many don’t realize that the government services that they rely on — their schools, colleges, universities, healthcare, housing, courts, public servants, such as firefighters and police, are dependent on funding determined by those who represent us in local and national branches of government whom we vote in. Their votes are their voices in providing input into this process.

McHugh: Through social media — we’re also on Facebook, Instagram, Twitter and TikTok — and by word of mouth. I’m sending it out to my nieces, and to other people who are younger than me, as well as to all my friends and to all the organizations committed to voting, such as the League of Women Voters. We need to see more civic engagement from young people of all political persuasions; there needs to be a significant uptick in the percentages of people who vote across all eligible ages.