Not even NAS Pensacola thought Sally would be so bad. They’re picking up the pieces too.

Capt. Tim Kinsella, commanding officer of Naval Air Station Pensacola, went to bed the night of Sept. 15 like many Pensacolians did — prepared to wake up the next day to a Category 1 hurricane that would dump lots of rain on the area, but hopefully move out without too much of a fuss.

Instead, he woke up around midnight to a Category 2 storm howling outside his home at the base, ripping roofs off his neighbors’ homes and snapping trees like toothpicks in his front yard.

“These old chimneys, the wind just howls down them. The decibels inside the house, according to my watch, were 80 decibels at times,” he said Sunday, standing outside a row of historic 1870s homes on Hatch Road, where some of the base’s highest-ranking officers live. “It really sounded like a freight train, and the whole house was shaking. The windows, you could watch them flexing in and out, and this glass is over 100 years old. Some of the windows broke.”

When Kinsella was finally able to emerge from his home Wednesday morning, he saw a base in shambles. Power was out everywhere. Massive, 100-year-old oak trees were lying across the streets.

At least three Skanska barges had broken loose and wound up on or near the base. One hit the bridge to the main gate, rendering it temporarily incapacitated, one beached on the west side of base and another beached at the RV park, just feet from the front porch of an empty cabin.

Roofs were blown out, debris was everywhere, parts of base were flooded. By the port office, a circular pathway of bricks was tossed around like Legos and wound up in a pile by the sea wall.

But miraculously, there were no injuries reported on base as a result of the storm. 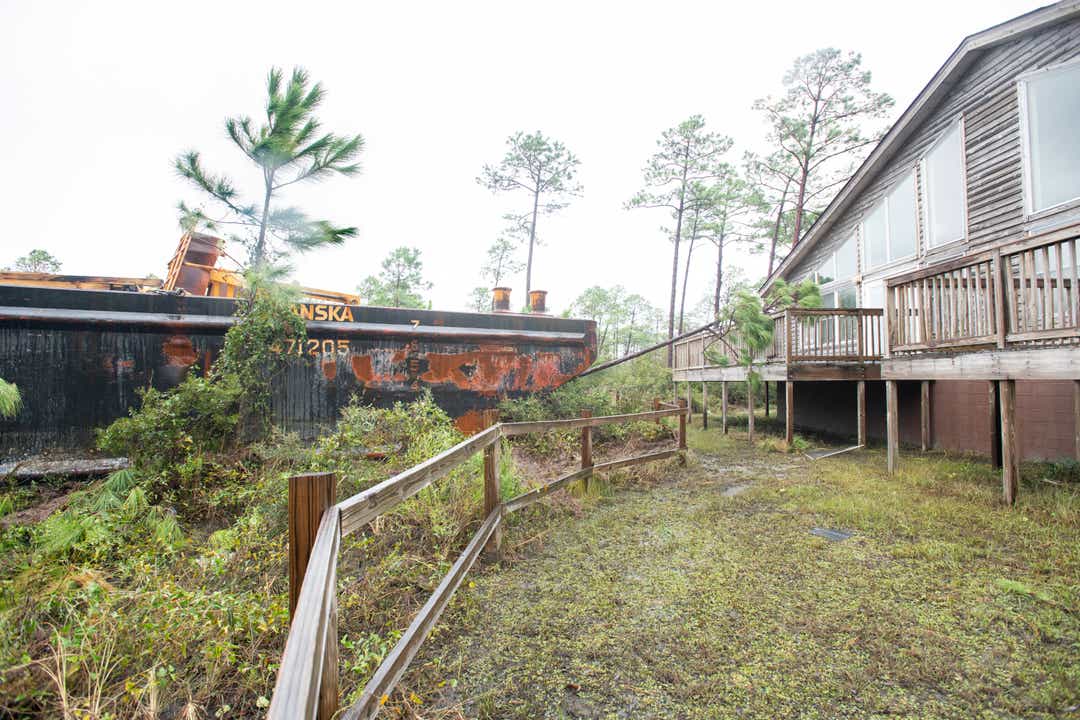 “It was like doing damage control on a flooded ship,” Kinsella said. “When I came out and got on base, it broke my heart. It actually broke my heart. It was very difficult to drive around and just see all these beautiful trees down. To see those beautiful houses that have been here since the 1870s, it breaks my heart even just driving around now.”

It took about 36 hours for the base to get back to mission capable status, which includes the ability to fly and fuel airplanes and perform other military necessary duties. As of Sunday, only mission-essential personnel were still allowed on base. It will likely take weeks, if not months, for things to get back to how they were before the storm.

Kinsella said the base was prepared for the storm and knew it was coming, but not even he anticipated the full wrath that Hurricane Sally unleashed on the area.

“Every time there’s a weather event that comes up in the Gulf, we get very, very detailed briefs from the fleet weather center. … It’s not a question of, oh my goodness, we didn’t know this thing was coming. But we really didn’t think it was going to get that strong,” he said. “Floridians are experts at hurricanes, and I think every Floridian is their own micro-meteorologists. Everybody knows how to read the apps and all that. And I think everybody was surprised. 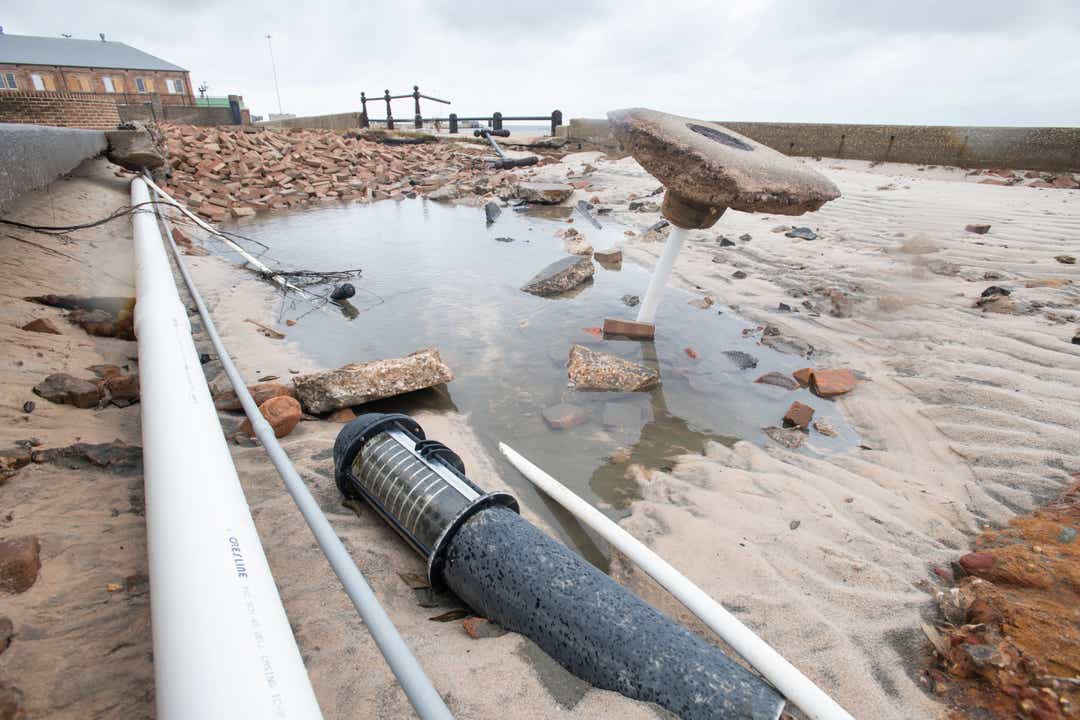 “We expected it to be a very heavy rain event, and we weren’t concerned from that aspect, because the base is sand. It drains so well,” he added. “When the wind came, it really did surprise us. It surprised everybody. I hate to say we weren’t prepared, it wasn’t like we were just sitting around doing nothing. We were doing our best to prepare for what we thought was going to happen. Trust me, if we thought it was going to be that bad, all those aircraft would have been out of here.”

Picking up the pieces

As soon as the full extent of Sally’s damage became apparent, teams from across the country descended upon NAS Pensacola to render aid and help expedite the cleanup process so the base could get back to normal as soon as possible.

One of those teams, the Construction Battalion (known as CBs, or SeaBees), arrived quickly with heavy machinery to help with debris removal and tree clearing.

SeaBees are specialized Navy personnel who are skilled at all kinds of construction and disaster recovery work — they can build runways quickly in the dessert during a battle, they can engineer and build ports, and they’re even combat trained so they can go into war zones. Their construction skills make them uniquely capable to tackle military bases after storms and other natural disasters. Kinsella affectionately calls them “soldiers with shovels.”

“It’s our job to go wherever we’re needed to provide makeshift or quick construction,” said Lt. Patrick Shine, Office in Charge of the Air Detachment. “So an example would be here, all this downed debris. It’s our job to come here and try to get this base back to operations.”

The SeaBees made quick work of the dozens of downed oak trees around the A.C. Read Golf Course on base, and were also spread out tackling downed trees around Barrancas National Cemetery and other places.

Another team that arrived to help NAS Pensacola is the CERT (Contingency Engineering Response Team), a specially trained group of military personnel that perform damage assessments on facilities following hurricanes or other disasters. The CERT teams go through each facility on base and check roofs and floors for flooding or anything that would prohibit someone from occupying the space in a safe manner. They also use drones to help them get a bird’s eye view of the base. 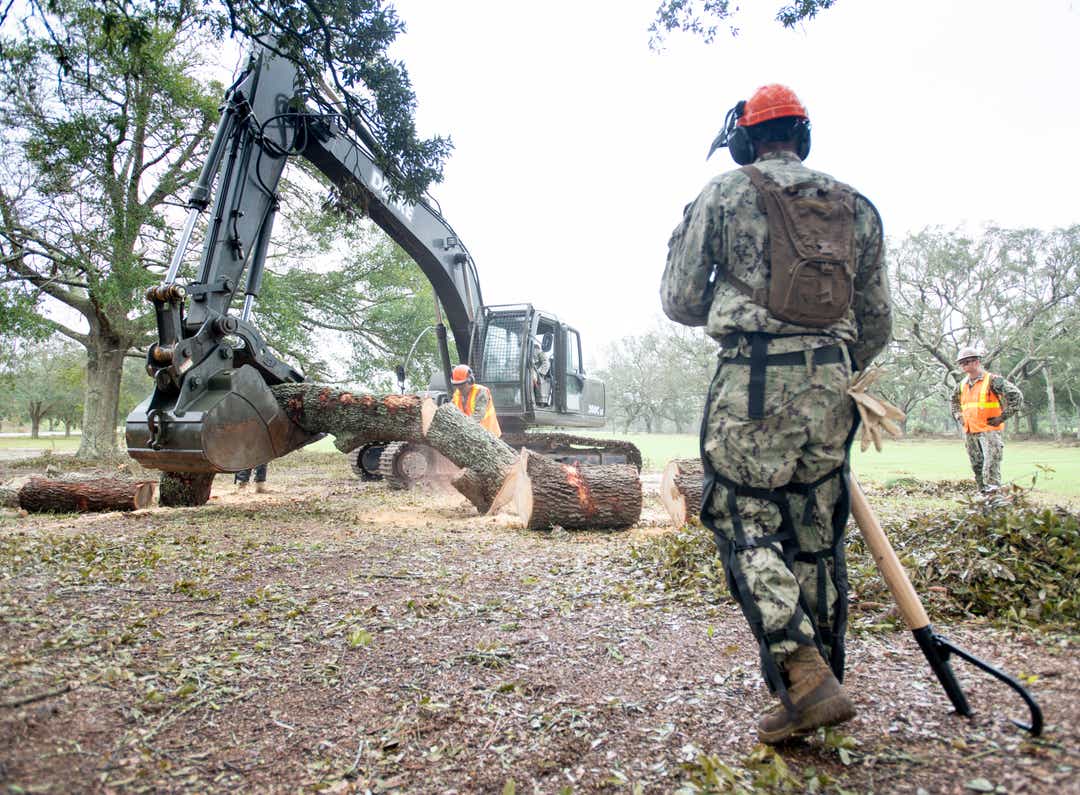 On Sunday, part of the team was gathered in a conference room inside the base’s public works building with maps and computers spread out all over the place, pinpointing different areas that still needed assessments and assigning teams to cover the rest of the 8,400-acre base.

“So far, there have been a good number of buildings that have water damage. We found several roofs that have ben compromised,” said Lt. j.g. Joshua Neill Tenorio with the CERT team. “But, for the most part, nothing’s been too seriously drastic. We haven’t seen any buildings completely demolished.”

Will NAS Pensacola ever get back to normal?

Hurricane Sally has been the third large crisis in under a year for the beleaguered naval base.

On Dec. 6, 2019, a terrorist opened fire inside a classroom building on base, killing three young sailors and wounding eight people before he was taken down by Escambia County Sheriff’s Office deputies.

Since then, the base has been closed to the general population and increased security measures have been implemented that have isolated the base from the greater Pensacola community, including closing the museum, lighthouse and other attractions to the public.

Then, in March, the COVID-19 outbreak forced the base to tighten its reigns even more, restricting many sailors’ movements in an attempt to keep those on base from getting or spreading the coronavirus.

And then when the base felt it was finally getting a handle on the virus and could start slowly reopening the base to the public, Sally happened.

“As the city felt that it was getting its head above water with COVID, we felt that way, too,” Kinsella said. “The numbers were going in the right direction. We felt that we could see the light at the end of the tunnel. Once we get COVID behind us, then we can start getting the base back open to where it was. We were working on that right before (Sally).”

Kinsella, who has about a year and a half left in his post as base commander (base commanders serve three-year terms), said his goal before he leaves his post is to have the base back open to how it was before the shooting. Sally may have put another road block to that end, but Kinsella, by this point, is skilled at handling crises. 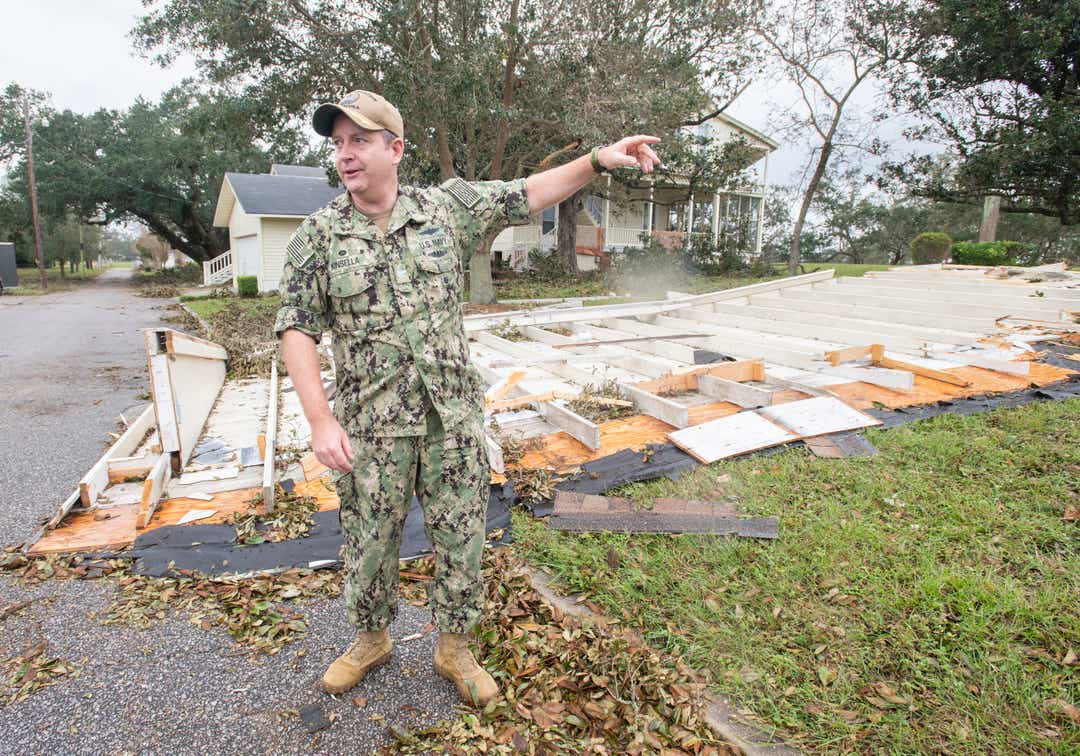 “Out of all the crises we’ve had on this base, the thing I’ve learned is that the crises, No. 1, are about people. They’re more about people than they are about the buildings and the stuff,” he said. “Money will come. Money is just money, buildings are just building. It’s the people that get you through this and that build you back up.

“To see the resilience of the people that work on this base, it nearly brought tears to my eyes,” he added. “To see people whose homes were in tatters, but they’re still showing up to work to take care of the 7,000 students we have on base. It’s incredible to see how the security guards are standing guard at the gate, but their family is at home with tarps over holes in their roof. They’re here because it’s their job, but also because they love it here and they care. I’ve learned how much people care, and how resilient they are.”