On a drizzly Monday afternoon in Milton’s Bayside neighborhood off Avalon Boulevard right on the Escambia Bay, piles of furniture, rugs and other home staples were piled roof-high at the end of driveways, where mailboxes were presumably once located.

Drywall hung like wet tissue paper in tangled trees. Boats and Jet Skis were lodged in front yards and stuck in ditches. Docks were scrunched up like accordions. RVs and cars sat mangled in driveways, windows were smashed in and doors torn off.

It was an almost apocalyptic scene in the quiet neighborhood, tucked away behind the hustle and bustle of the Avalon corridor and easy to overlook if you don’t know it’s there.

In fact, many residents said that in the days after Hurricane Sally made landfall, they feel forgotten by the greater community, despite being one of the hardest hit neighborhoods in the Panhandle. 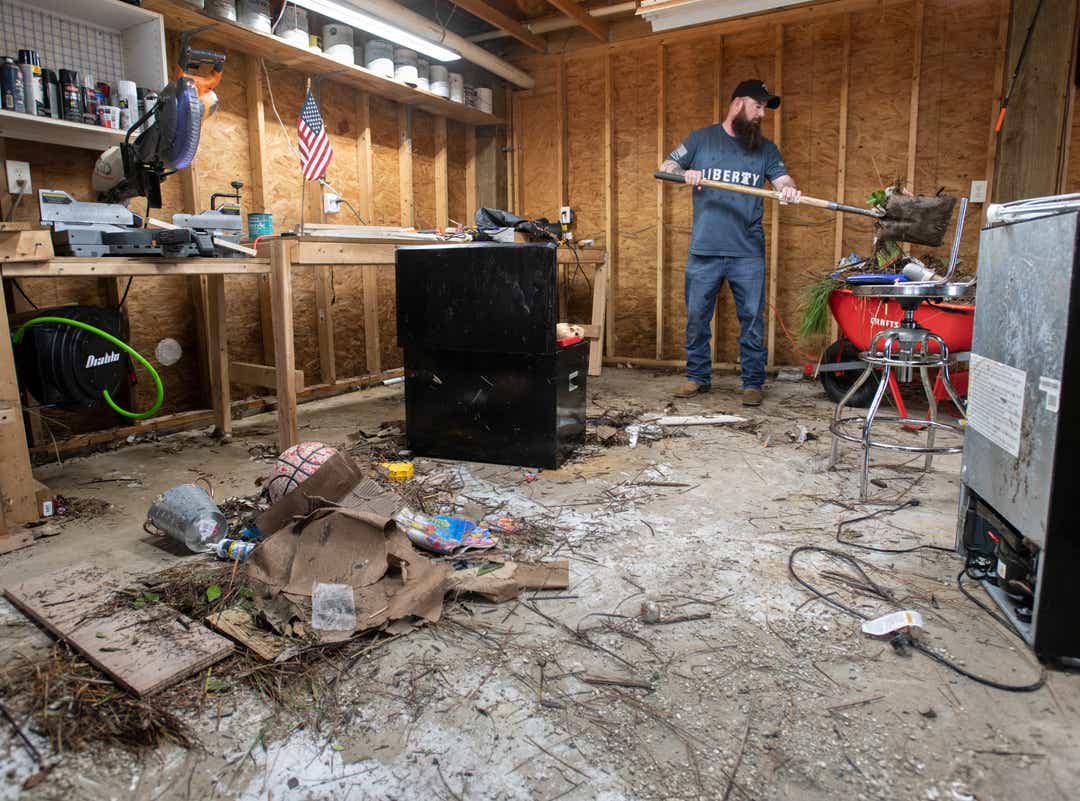 “There hasn’t been one service entity back here. No American Red Cross, no fire department, nothing,” said Pat Braunstien, who lives with her husband Sid in a home on Mills Bayou Drive.

The couple’s home sustained minimal damage during the storm, and they’ve dedicated the past week or so to helping their neighbors who suffered much worse fates.

“Why wouldn’t anyone come back here with water or food or something?” she asked, noting that almost all of the neighbors lost their cars in the storm and weren’t able to go pick up water or food or get other kind of help.

Residents live in tents and RVs while homes dry out

The waters rose quickly and fiercely in the early morning hours Wednesday, submerging basements, first floors, garages, cars and anything else that wasn’t elevated 8 feet off the ground.

At a home on Bayside Boulevard, the Fitzsimmons family was riding out the storm in their one-story house that sits about 500 feet from the bay, separated by salt marsh in between.

Kristen Fitzsimmons lives in Mississippi but evacuated to Milton to be with her brother, Ryan, who lives in the Bayside home. She thought Milton would be a safe place to ride out the storm, but like many people, she was surprised by Sally.

“We had to crawl through this front window because all the doors were swollen and then hop in a boat,” she said, pointing to a window at the front of the house. 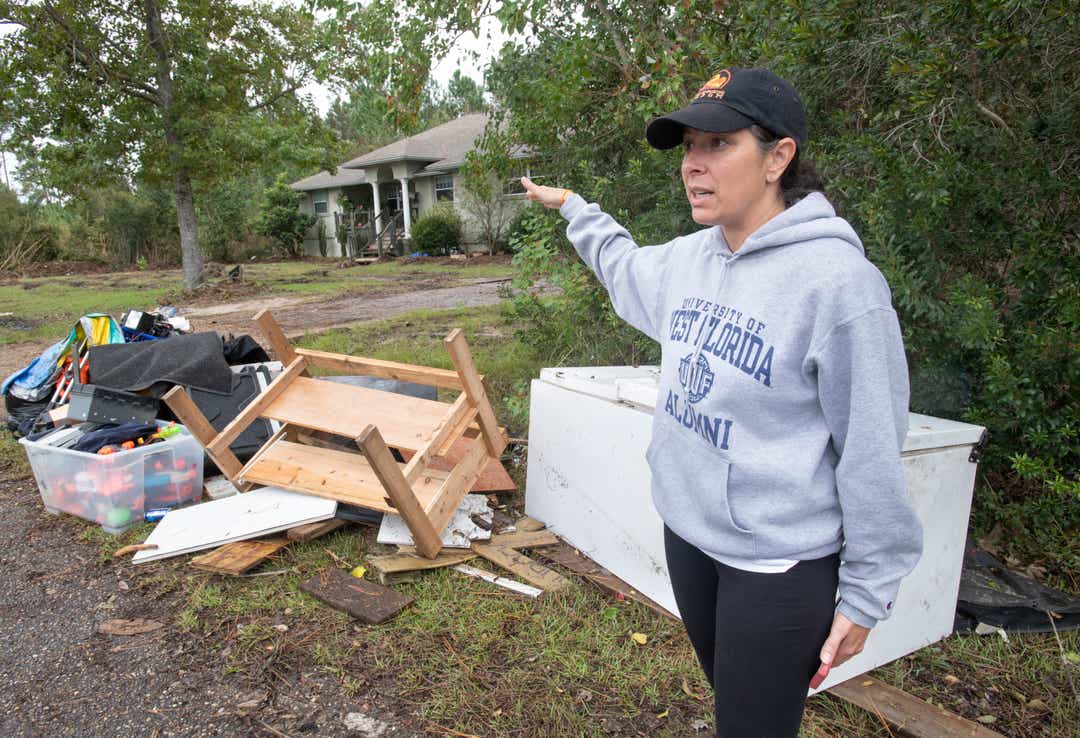 They were boated to safety with their kids and pets, and when the water receded, they were left to clean up the disaster that Sally left behind. Ryan Fitzsimmons is sleeping in a tent in the front yard, his parents are sleeping in an RV in the driveway and Kristen and her family are sleeping on a single mattress in the middle of the living room.

All of the furniture in the house was ruined in the flood, and is sitting in piles at the end of the driveway.

Down the street, Jamie Link was shaken to her core by what she saw last week. She was removing sopping wet items from her home on the gray Monday afternoon, still waiting for power to be restored.

“This was crazy. This was so unexpected and we were so not prepared for this,” she said. “That’s what’s hard, because there are so many things that could have been saved, if we had just thought there was an inkling that it would be this bad.”

Across the street from Link, Army veteran and Purple Heart recipient Stephen Quarles and his pregnant wife Melanie said there was an “ocean” around their house on Wednesday as Sally’s winds lashed the house. 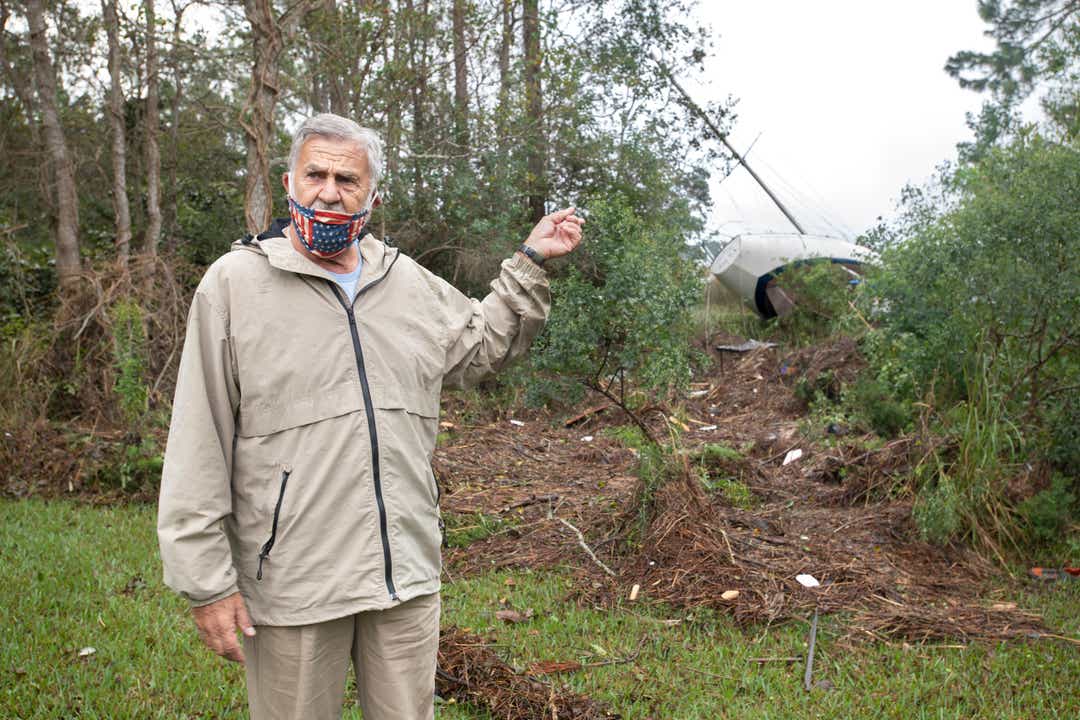 Quarles, a woodworker, lost his entire woodshop and all his equipment, which was located in the garage on the ground floor of the home. Insurance won’t pay to replace any of his things.

He said now that the adrenaline from the storm has worn off, the reality of what his family will have to overcome in the next few months is beginning to sink in.

“Today is the first day it’s really been kind of devastating. The last few days you’re concentrating and starting to clean up and you have a little bit of hope, but then you start tallying everything,” he said. “It was one day at a time, now it’s one hour at a time. We’re in for a lot of cleanup. A lot of cleanup.”

Santa Rosa County is still sending out teams to assess damage done by the storm. To report damage in your home or neighborhood, call 850-983-INFO and complete the online damage assessment on the county website.