There’s good reason why football players and coaches spend so much time in the weight room.

Strength can make or break a play – and sometimes game – when a team needs just 1  more yard for a first down or a goal-line stand on defense.

Here’s a look at the strongest football players in Escambia county in alphabetical order by school: 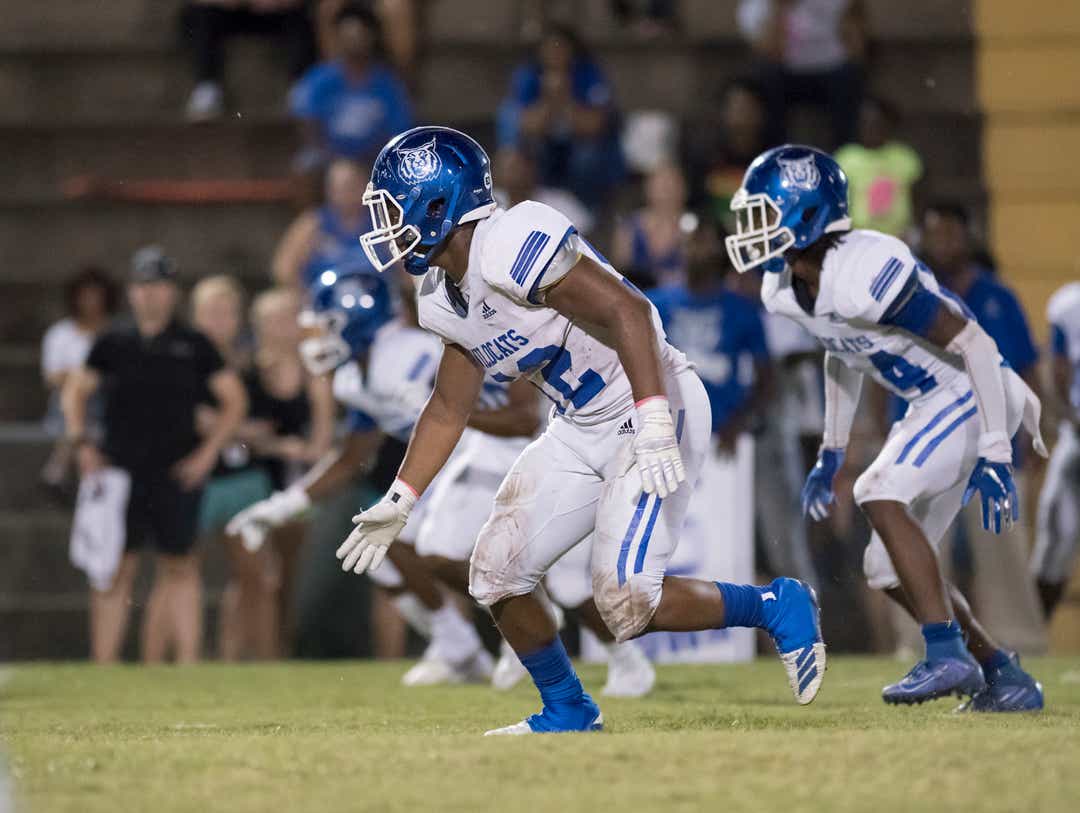 One doesn’t’ pick up a nickname like Tank, unless well, they are built like a tank and Dale is credited for being a warrior in the weight room.

“He just works his butt off,” Washington coach Tommy Joe Whiddon said. “Playing mike linebacker, he does a great job of going downhill, taking on and shedding blocks and stopping guys in their tracks. In high school, that can be a rare skill. Most people aren’t fired up about taking on a 270-pound lineman, downhill and shedding a block and hitting someone. With his strength, he’s able to do that.”

Franklin uses his strength on both sides of the ball at the line of scrimmage but specializes in offensive line.

He was invited to a Blue-Grey All-America regional combine in AT&T Stadium, home of the NFL’s Dallas Cowboys.

“Derius can give Tank a run for his money,” Whiddon said. “He’s super strong in the lower half. In the time off from COVID-19, no one has been able to lift like we were lifting before. But Derius stepped back in and didn’t miss a beat in the weight room because of his natural strength.”

The Crusaders have plenty of strength on the defensive line with a duo that defensive coordinator Kerry McDowell is comfortable with positioning anywhere.

Though there hasn’t been a max out day at Catholic this summer, Bruster wowed his coaches and teammates during a combine-style session when he benched 225-pounds for 14 repetitions.

McDowell added that Fuvai is “straight muscle” and and two linemen feed off each other in the weight room and on the field.

“Brayden is tremendously strong and blows lifts out of the water,” McDowell said. “We haven’t really loaded up for one-rep maxes, and the shear poundage he can handle at high reps makes him one of the strongest kids I’ve had in quite some time. Bruster and Fuvai have put in so many hours on their own in the weight room, it’s enjoyable to watch them. It’s not like they are just bench kings or squat kings, they are total-body strong.”

Also in the mix is Waymond Jordan Jr., a class of 2021 running back who is referred to by his teammates as “baby hulk.”

“He’s been strong since we got him day one,” head coach Matt Adams said. “He has a great mix of balance and power and uses it on the field. He bounces out of a lot of piles, has a low center of gravity and with his leg strength, he pulls his legs out if someone grabs him by the ankle.”

Before his strength crossed over to the gridiron, Johnson said he was always the bigger kid in school.

In third grade, he said his older siblings stopped play fighting with him because he didn’t realize his own strength.

He started as an H-Back last season, clearing would-be tacklers out of the way for an offense that averaged 393.6 yards-per-game, scored 76 touchdowns and finished as state runner-up.

“In practice, I mostly go against our offensive and defensive lineman,” Johnson said. “They’ve got the bigger bodies on the field. So when I met those linebackers and defensive ends in games, it would be different. I’ve seen myself upgrade a lot as a player. I spent a lot of time bulking up when I got to high school. I’ve been working on speed, stretching and muscular endurance lately.

“I think I can be a really strong and versatile tailback this year.” 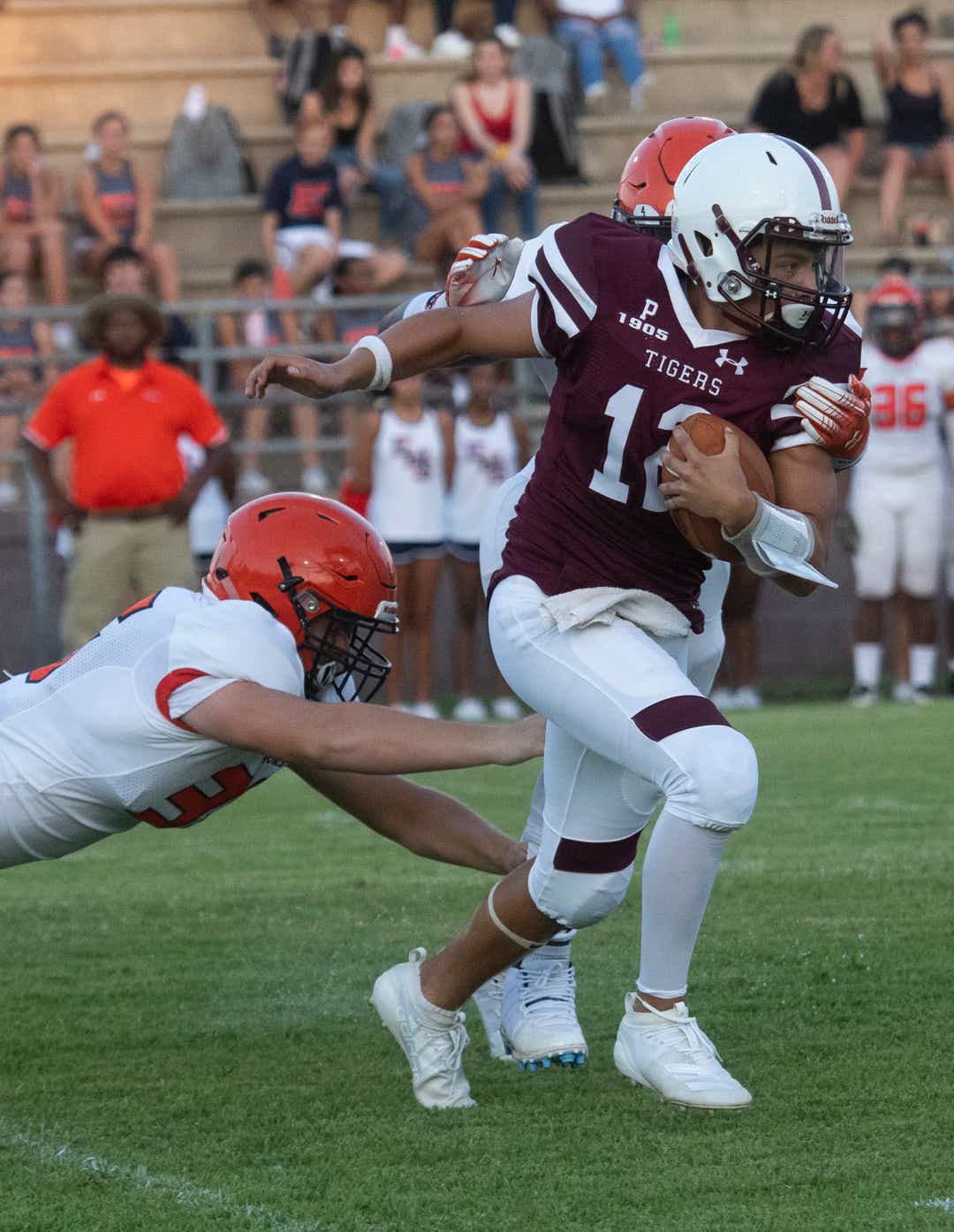 Pound-for-pound, Simmons jumps off the page when looking at his size, strength and age.

Heading into his junior year, he doubles as a leader on the field as a quarterback as well as in the weight room with a 410-pound squat and 285-pound bench press.

“He’s lean, but strong and just worked like a mad man,” PHS coach Todd Leonard said. “I don’t know if you see many quarterbacks lifting as much as him. He’s gotten a whole lot stronger in the last year. When you look at what he lifts and then realize he’s a junior quarterback, it’s hard not to be impressed.”

Simmons will be protected by Williams, a junior offensive lineman that squats 510 and benches 280.

“Zurick is built well, plays low to the ground and moves the pile,” Leonard said. “Hopefully we will be able to put people behind him this year and grind it out. Zurick worked really hard in the offseason and continued to train on his own every day during the time away from football due to COVID-19.” 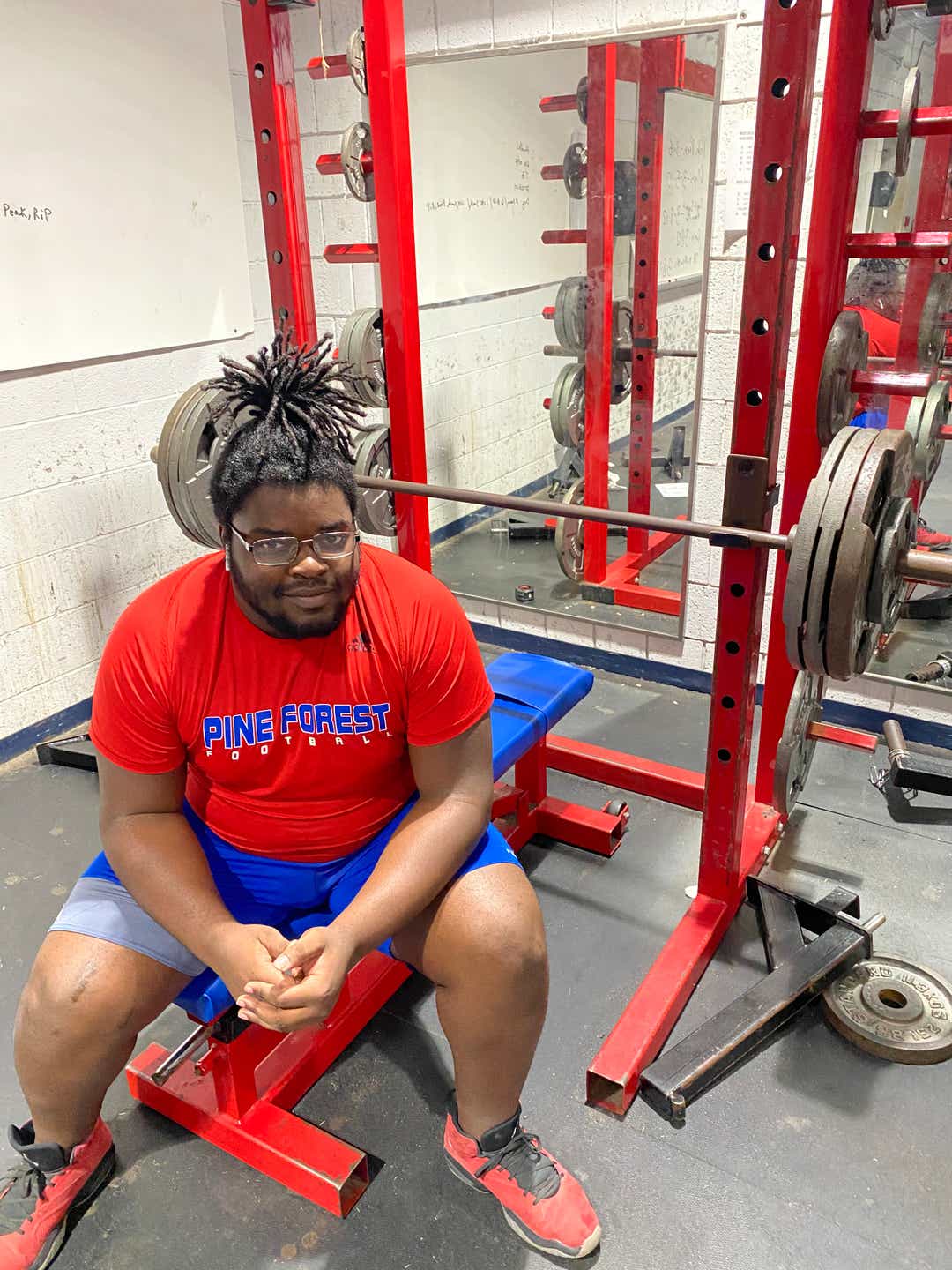 There’s no shortage of strength in the nest of the Pine Forest Eagles, with four players who have totaled more than 1,000 pounds between squat, bench and clean-and-jerk.

Lovelace, Terrell and Grandison were all stopped at a 500-pound max by weightlifting coach Ryan Vandervort.

“Rasheed’s lower body has always been really strong and he showed it coming off the line to explode into the offensive line and using his hips and strength to shed blocks,” Vandervort said. “Terrell is one of those kids too. They could just keep going up on leg day, but I don’t let them put on too much weight. If they are squatting 500, going low and parallel, that’s great right there. Grandison has been one of the strongest kids in his class since freshman year. With him being a running back and linebacker, you want someone powerful. He runs through guys when he explodes to tackle them and when he’s running with the ball.”

With as impressive as that trio is, Yelder likely has the potential to be the strongest at Pine Forest, though he had to overcome knee surgery and missed his junior season.

He leads the team with a 335-pound bench and has shown plenty of heart to get back on track in the weight room.

The athletes who stand out for the Northview Chiefs bring a valuable blend of strength and versatility to the program.

He has six offers which include Boston College, Wake Forest and Middle Tennessee.

Jonny Wydham is powerful offensive lineman who doubled up as a linebacker this year, but is expected to play OL and defensive end during his senior season. He recorded a 285-pound power clean and 250 on bench.

Trevor Scott brings a 265-pound clean and 250 bench, using his strength towards power run plays on offense and as an effective middle linebacker on defense.

“Jayden is an absolute beast in the weight room,” Northview head coach Wes Summerford said. “He’s an up runner and it’s like pin balls when people try to tackle him. He turns plays that could be a five-yard loss into touchdowns. Jonny is a huge a guy, you wouldn’t think he moves as well as he does but when he pulls around that edge to block, he looks fast and physical.

“Trevor is all energy, all-the time. He sprints everywhere he goes and is very physical on the field and strong in the weight room.”

In his early high school days, Bryant had a great frame but not the strength to match.

It only motivated him in the weight room over the last three years.

“I saw guys way smaller than me lifting a lot more,” Bryant said. “When I first started lifting weights and playing football as a sophomore, I had to power clean 95 pounds just to get reps and work on my form. I could barely squat 135. Now, I’m cleaning almost 315, squat 450 and bench 300.”

Bryant and Lyle bring energy to Tate’s lifting sessions, while enjoying the loud music by signing and dancing between sets.

But when it’s go time, they don’t play around.

“We keep everybody in check,” Bryant said. “No skipped reps. We feel like we have something to prove at Tate this year and are putting in work every day to get there.”

Lyle squats 500, cleans 260 and benches 240 while also bringing playmaking ability to the field on offense.

“He just snags balls out of the air and breaks tackles,” Bryant said. “He’s sort of a goofy guy that goes with the flow, but when push comes to shove, he can really be a leader for us.”

West Florida coach Rhett Summerford said the strongest player title currently belongs to Simmons, but that Johnson has the possibility to exceed his elder teammates.

Simmons set a single-season rushing record at West Florida last season, using a potent mix of speed and strength to get there.

“Jaheim has been our strongest guy and is our motivator in the weightroom,” Summerford said. “He cut a little weight to pick up some speed, and you always lose a bit of strength when you do that. But he’s still Jaheim in the weight room.”

Johnson shined as a junior varsity running back last season, but Summerford believes his potential on the field and in the weight room is far from being reached.

“Pound for pound, he’s probably our strongest kid,” Summerford said. “He hasn’t proven himself to be a big time player yet, but he defientely could be. He has so much explosiveness and strength. He’s been at workouts this summer as much as anybody. I think he could be a standout and is on pace to possibly be the talk of the town in the future.”

Brian Achatz can be reached at [email protected]