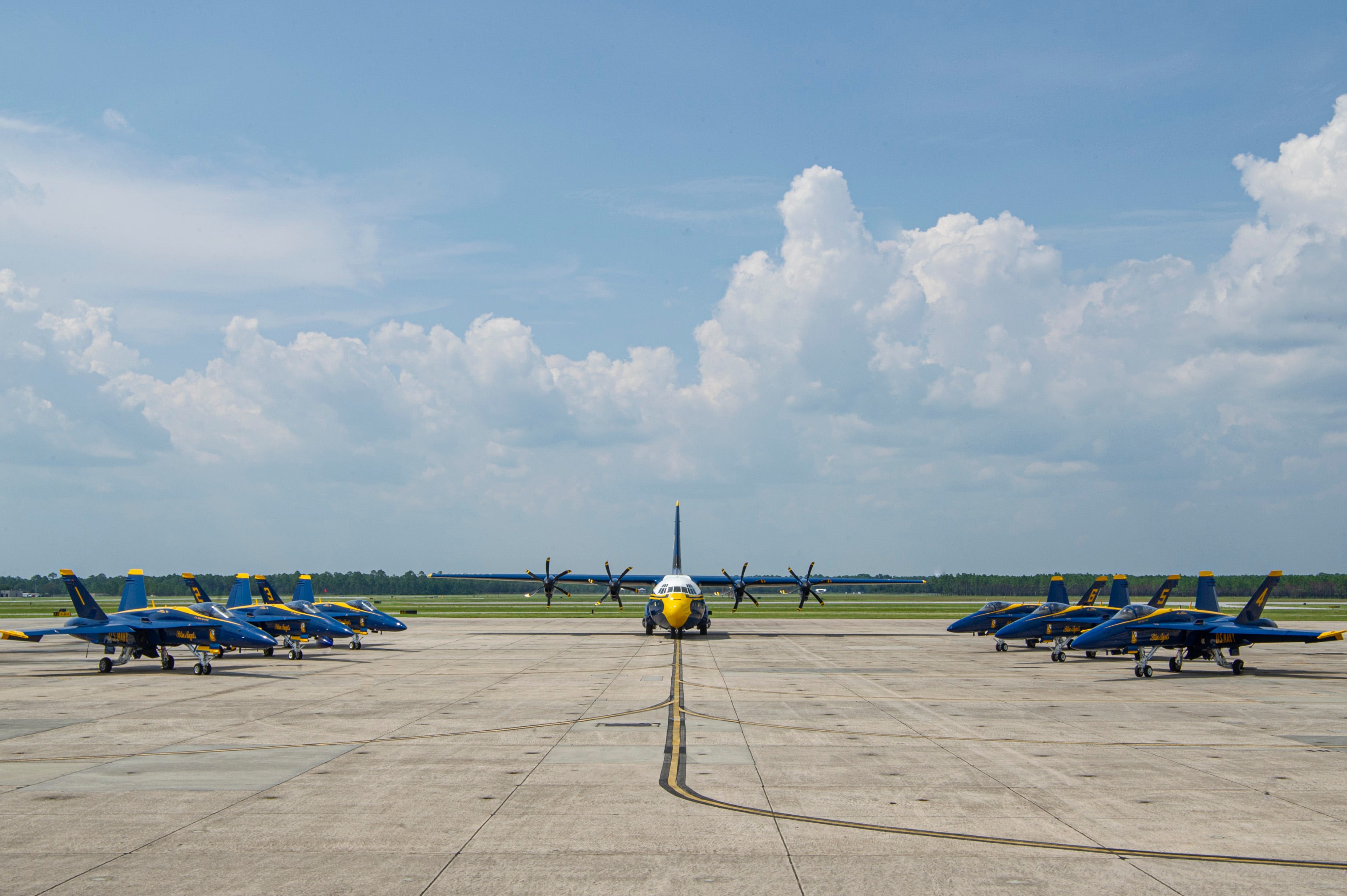 Fat Albert has reached its final destination of Pensacola. How’s that for a totally different source of the “Monday blues?”

From Aug. 4 until this past weekend, “Bert” was at Naval Air Station Joint Reserve Base Fort Worth in Texas to undergo a routine cyclical engine inspection.

The eight-person Marine Corps crew that is now taking the reigns of the new Fat Albert also received a little fine tuning from the team in Fort Worth.

“It’s been a long time coming to get this plane back to Pensacola and there have been a lot of people that have put their heart and soul into this aircraft in getting it ready to go,” said U.S. Marine Corps Capt. Rick Rose to the News Journal on Aug. 7. “From the people way up top in the Marine Corps and Navy to get this purchased in the first place, exploring options and thinking outside the box with how we’re going to get the Blue Angels a C-130.”

More on the new Bert’s year-plus journey to Pensacola:

Before its pit stop in Texas, check flights for Bert were conducted July 20 and July 28 in the aircraft’s home country of England.

The Blue Angels purchased what is now the new Fat Albert from the British Royal Air Force in June 2019. Countless organizations — from NAVAIR PM207 to Lockheed Martin to Marshall, the contract company that specializes in C-130 engineering projects — have had a hand in getting Bert to full functionality.

The new Fat Albert is expected to be a full-go for the 2021 Blue Angels air show season.

New features found in and on the new Bert

“We kind of wanted to go with something different so you could tell it was a different aircraft, a newer aircraft,” Rose said, about the paint scheme.

The new Bert has yellow tips on the wings, two stripes down the side and a new white teardrop on top.

“It’s definitely different from the older models, and also, it goes along with the jets a little bit more,” he said. “It matches them.”

“Those new props provide up to 20% more thrust compared to the old models,” Rose said. “That’s one of the biggest upgrades on the plane. You can definitely tell when we fly that plane, and when we were testing it out in England. It wants to go flying. It doesn’t take up a whole lot of runway but comparing the performance between the two, it flies like a whole ‘nother aircraft, really.”

Replacing the former Allison-powered engine of past models is the C-130J’s new Rolls Royce AE-2100 engines.

“Those are what the fleet Marine Corps uses in their J models,” Rose said. “The engine and the props provide a huge amount of performance difference.”

As opposed to the old T model, which forced pilots to look down through the front window, the new Fat Albert’s heads-up display makes for a more convenient flying experience; the pilots’ eyes don’t need to refocus to look at the outside of the aircraft rather than looking down at their instrumentation.

“The heads-up display is kind of like a projector that provides everything on a piece of glass right in front of your face,” Rose said. “All of the information is right there in front of your face. So that’ll help a lot in the long run, especially when it comes time to do the demos.”

All instrumentation for the pilots is on glass screens. The old steam dials that were in the T model are gone, Rose said.