Nearly a week after Hurricane Sally tore through the area, a snapshot of damage in Santa Rosa County is beginning to emerge as some of the hardest-hit areas anxiously await a major disaster declaration from FEMA.

Brad Baker, the county’s public safety director, told the News Journal on Tuesday that the county completed about 90% of the damage assessments to private homes, commercial businesses and public infrastructure based on those who self-reported damage.

The worst-hit areas, according to county GIS data, are along the Blackwater River, the Garcon Point peninsula, Navarre, unincorporated Gulf Breeze and Midway.

“We’re relying on citizen-reported damage to make sure we’ve been to a specific damaged area,” Baker told the News Journal on Tuesday.

Sally: Santa Rosa estimates around $21 million in damages and recovery costs so far

As of Monday afternoon, more than 1,000 damage assessments were conducted, and:

The numbers could go up or down over the coming days as the county does more assessments and refines its totals.

The structures that were destroyed or had major damage were mostly located directly along the coastlines of East Bay and Escambia Bay, as well as along the Blackwater River. Most of the damage consists of flooding and water damage, as opposed to wind damage.

Jamie Link, who lives in the heavily hit Bayside neighborhood on the Escambia Bay in Milton, said she and her neighbors self-reported their damage in the days following the storm. But she was worried about those who weren’t able to self-report due to lack of power, internet or cell phone signal.

“If somebody hadn’t sent me a direct private message with the link, I probably wouldn’t have known about it,” she said. “WiFi is down and signal is a little bit weak, so we’re just not getting stuff timely if we’re out here.”

Dave Piech, the commissioner for District 4, which includes Navarre and Navarre Beach, said damage assessments will likely be ongoing for weeks, if not months, as people continue to self-report.

“I have a feeling a lot of folks are doing that, but there’s still a lot more damage that’s going to be uncovered as folks realize they need to report it,” he said. “That’s going to be ongoing for a while.”

Damage to public infrastructure, the beach and commercial buildings

The number of public facilities is expected to grow, as the county hasn’t finished assessing all its damage to roads yet.

Some of the public places that sustained the most damage are located in Navarre and Navarre Beach. The beach lost an estimated 100 million cubic yards of sand, and assessors are still on the beach surveying damage throughout the end of the week. That will require extensive renourishment, Piech said.

“(The sand loss) is mostly on the east side, and then we have some breaches in the dunes,” Piech said. “We started that assessment late last week, and I’m hoping to get the full data by the end of this week.”

Navarre Park suffered torrential flooding and will have to be repaired as well. The newly remodeled Navarre Beach Fishing Pier sustained minor damage to its pilings and wooden decking. Juana’s Pagodas and Sailors Grill also suffered flooding and wind damage and is closed until further notice.

In the central part of the county, the courthouse in downtown Milton suffered minor damage to its roof and external facade.

The Garcon Point Bridge sustained minor damage when it was struck by one of the 20 runaway Skanska barges, but has since re-opened to full traffic. Piech said the damage to the Three Mile Bridge, which suffered catastrophic damage and could be out of commission for another three months, will put more pressure on county roads as people use the Garcon Point Bridge and U.S. 87 to get from Pensacola eastward.

“We’re in lockstep with FDOT and the state on all that, because we’re going to bear the brunt of all that traffic over here,” he said. “That’s going to require coordination, like re-timing the traffic lights to account for all the traffic. It’s going to be a lengthy recovery.”

County officials are touring with FEMA officials on Tuesday and Wednesday to do more damage assessments and see if the county is eligible for a major disaster declaration, which would unlock federal dollars to help recovery and rebuilding efforts.

Baker said getting that disaster declaration is crucial to helping the area start to dig out from Sally.

“It’s very important. I mean, we’re already strapped with down revenues and all that, and to have to come up with this money is just daunting,” he said. “Debris alone is $20 million.” 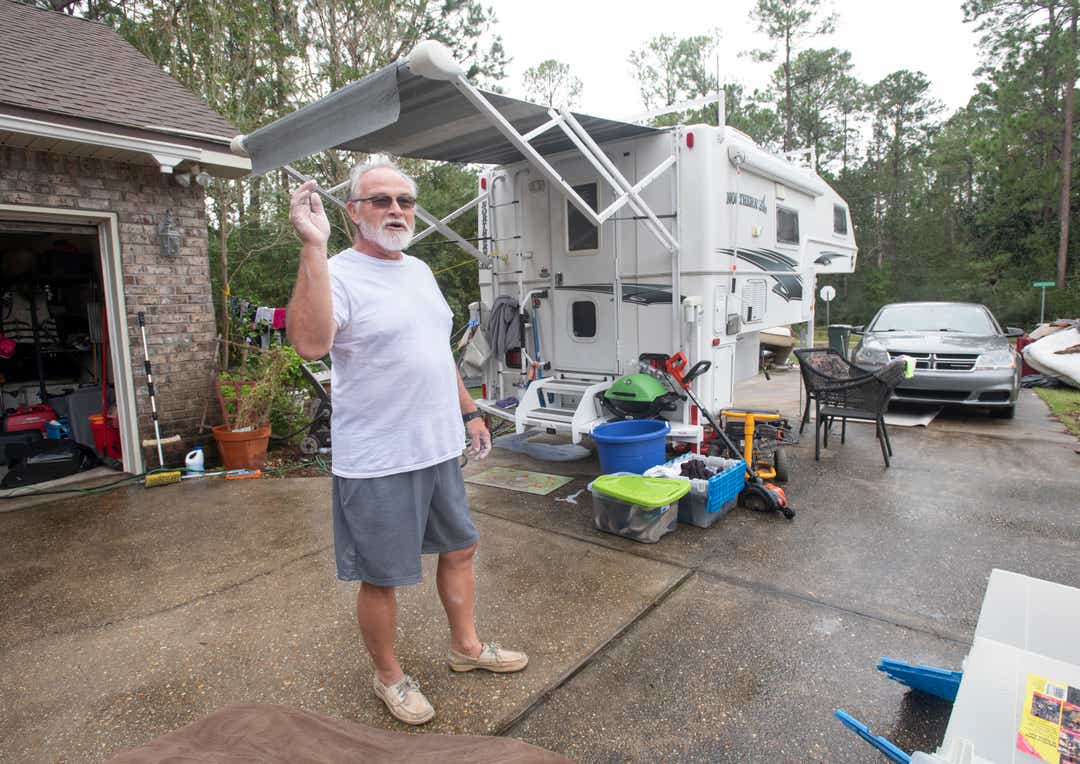 Raymond Fitzsimmons lives in Mississippi and was helping his son, Ryan Fitzsimmons, clean out his Bayside Boulevard home (near the Escambia Bay in Milton) on Monday. Fitzsimmons said he and his wife went through Hurricane Katrina in 2005 and so are familiar with the process of applying for and getting FEMA money. The fact that Santa Rosa County hasn’t been declared a major disaster yet is concerning and frustrating for him.

“The FEMA money isn’t even coming,” he said. “There’s going to be a lot of people who are in the same situation as we are, they’re not in a flood zone so their homeowners’ insurance isn’t going to cover this. That’s our experience from Katrina.”